Last week, I attended #Think2019, to get an update on what’s coming up for Notes/Domino and the rest of the Collaboration Family Software. We have seen a lot of exciting news and may say that the future of Notes/Domino is bright and promising !

Last year they released Domino V10 on the 10th of October during a world premiere that was attended by a large group of people, both online and at the worldwide events itself. Since this launch, they released V10.0.1, the AppDev Pack, Domino Query Language (DQL), Domino mobile apps on iPad and now preparing for V11.

On tuesday, I attended ICS Collaboration day that was kicked off with the following true story… 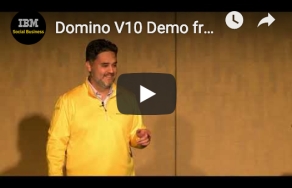 Luis Guirigay spoiled us with a fantastic demo where he showed the integration of Domino Applications in Office365 by taking advantage of the Domino AppDev Pack and the use of Node.JS and Node-Red.

In the video at the right, you can see how notifications can be send to MS Teams, Slack etc and how you can use an Alexa echo speaker to interact with your Domino Server as a user to approve requests or as an Administrator to monitor your server.

One of the main new features that they’ve released with V10, was Domino Query Language (DQL).

Domino Query Language (DQL) is a facility running in Domino core allowing for a terse shorthand syntax for finding documents according to a wide variety of complexity of terms.

In the video at the left, you can see a demo of the new DQL Explorer which allows for a business user to easily create his own queries to retrieve data and export to csv for example.

The Beat Goes On !

This year they will release V11 with a focus on the UI and the speed of the client.

Sametime will have a refreshed backend and frontend with persistent chat across all clients.

In the video at the right, you can see the session we attended about what’s coming up this year.

I also attended a session about Verse and Verse On Premise where they mentionned that more and more the features of iNotes will pop up in the Verse client. This is a clear sign that customers that use iNotes slowly may start looking at Verse as there next browser-based mail client.

As you can see, there is a lot happening in the world of Notes/Domino, and this is only the beginning.

On the 14th of March, you will have the opportunity to get to see a sneak peek of the new V11 client. Register for this webcast by filling in the registration form